It’s been much too long (over a year!) since I last wrote an update letter! For this, I apologize.
Let’s see—what’s happened since June 2015? My inlaws got a new puppy (who is now pretty much full grown, of course, but still relatively small, as he’s a Yorkie) which they named Max. 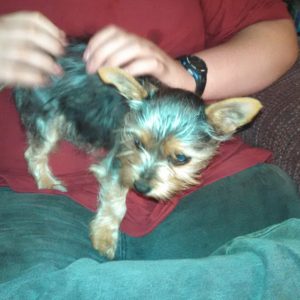 In July 2015, I finally cut bangs back into my hair after three years of growing them out. I definitely prefer how I look with bangs, I discovered!

Mid-July 2015, Bobby, Timmy, Nate and I went to a Doctor Who convention (fans of the science fiction series Doctor Who) in Madison, AL, and enjoyed that experience.

I got to visit with my friend Nicole, who moved to the area from Washington State around 2012 and moved back this year, a few times last summer.

In August 2015, Timmy started his first year and Bobby started his last year at Northeast Alabama Community College. Timmy took general classes last fall because he had not yet decided what he wanted to study. 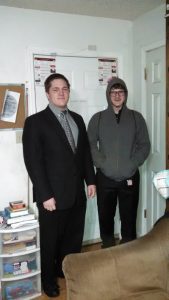 In September 2015, Robby turned 49. We went and watched War Room, and it is an EXCELLENT movie. (We later purchased the DVD/Blu-Ray/Digital.) Also, Nate and I entered the Jackson County Fair (I entered a baby blanket I crocheted and he entered two of his sculptures) and all three won blue ribbons!

We also traveled to South Carolina to celebrate Rachel’s 21st birthday. We went a couple weeks early, because she had plans with her friends for the actual day, and we had time/money available at that time. We had a really good time with her and my parents and my brother’s family. 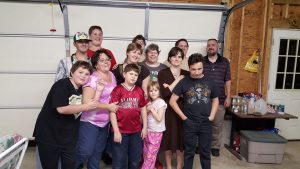 Later in the month, I bought bricks to make a new fire pit in the back yard, and also a few paving stones for an area at the house-end of the driveway where it drops off into grass. Also, Robby’s dad began a small outbuilding near the back of the house for use and storage. The boys helped him quite a bit.

In October 2015, Timmy turned 19, and also got his official driver’s license. It’s been very nice to have another independent driver in the family, even if he rarely goes anywhere alone.

In November 2015, we discovered that our oven element had given up the ghost – right before Thanksgiving, no less. So, we ordered a new one from Amazon, and (thanks to Prime) had it the next day (Tuesday of Thanksgiving week!) and were able to cook dinner!

December was our usual busy holiday season, and I can’t remember anything in particular that stands out.

In January, Nate turned 16! That still seems a little surreal. We got him a cell phone. (He also got his driving permit!) 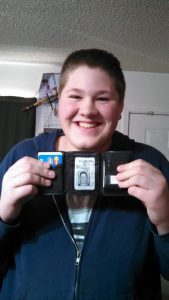 Also, Robby’s shed was finished, and we started putting stuff in it. It’s very nice and matches the house.

Bobby officially received his AAS in Computer Science in the mail.

In March, I got my remaining three top teeth pulled and added to my partial, resulting in, essentially, a full denture without the palate piece. I prefer it that way, for now, but will likely need to get a “real” denture sometime in the future. I’m not in any rush!

In April, Bobby turned 23—I can hardly believe my oldest is “mid-20s” already! Time sure does keep moving. In May, he participated in the college graduation ceremony—the first graduation for him in which he dressed in cap and gown and walked across a stage. 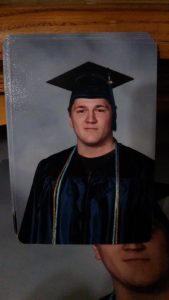 In May, I got some contact paper and covered up my kitchen wall between the cabinet and the countertop. Instead of dirty white, it is now black floral pattern on a white background. I like it a lot better! 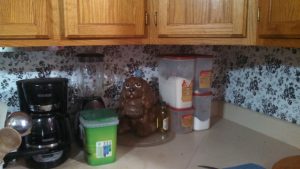 In June, we took a trip to Ocean Springs, MS. It was a “working vacation” – Robby did some work for a pharmacy there and we visited the beach and some other neighborhood locations, including a laundromat to rewash some clothes that had been brought that hadn’t had time to dry before packing and had soured. At the laundromat, Nate struck up a conversation with a gentleman who was also doing laundry, and it turned out that he had participated in the Spartan Race (a popular obstacle course race that is televised). Nate expressed interest and the man gave Nate his participation bracelet “to keep you inspired.” It was very neat! We were in Ocean Springs Monday through Wednesday.

On Thursday and Friday, Timmy & I took John Luke and Sarah to VBS at Madison Baptist Church.

Saturday of that same week, we once again attended Con Kasterborous, the Doctor Who fan’s convention. This year, we took our friends’ boys with us, as well. We met Frazer Hines & Colin Baker, and also talked to Caitlyn Blackwood—all of whom were part of the Doctor Who TV Show. It was pretty fun. We saw people we see every year, and met a few new people, too!

That was a very busy week!

In July, Timmy buzzed off his fluffy almost-afro and ended up looking like a totally different person! 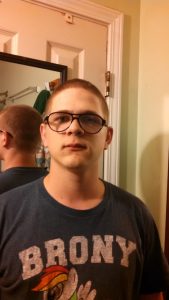 Also in July, my inlaws found a pogo stick somewhere and bought it for John Luke & Sarah. They love it! And it’s good exercise!

We also had a very nice visit the weekend before Independence Day with my parents, Rachel, and her friend Laura. They didn’t get to stay long, but we enjoyed having them here! 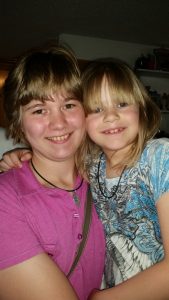 Mid-July, I tried my hand at homemade cream puffs, from choux pastry and a filling recipe from the internet. They turned out delicious!

We noticed a plant had sprung up in our “garden planter” (which we set up for strawberries, but none of the plants we put in survived) that appeared to be some sort of squash. Interested, we kept watering and watching, and got a nice sized pumpkin from it! We are hoping for more, but even if we only get the one, it is a great blessing!

My sister-in-law Cathy and her family came to visit toward the end of July, and we very much enjoyed spending time with them. The kids loved being with their cousins for a few days, and we hope we can get together again sooner next time!

The weekend after they left, my sister-in-law Renee and her husband came into town. She spoke at our church’s Mother/Daughter Banquet and he preached Sunday and Wednesday for our “Homecoming” celebration. It was a nice visit, but seemed a lot too short!

We also added another pet—an adorable female kitten who Nate named Juliet. It took her and Scout about a week to get used to each other, but now they play together and get along wonderfully! She is cuddly and purry and we are loving having her!

At the beginning of August, Timmy bought a car! It’s a 1991 Pontiac Bonneville that needs some work, but runs and should get him to college and back. He’s pretty excited about having his own wheels! 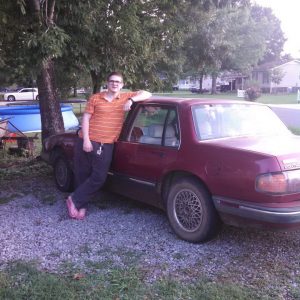 Robby & I celebrated our 25th Anniversary this year! The church had a little party for us with cake and ice cream on Sunday after church, and on Tuesday (our anniversary), we took a little trip to Chattanooga and had a nice time.

This week, Robby & I decided to try something called “The Potato Hack” – in which one eats only potatoes and drinks only coffee, tea, or water for 3-5 days. We heard about it originally in an interview with Penn Jillette of Penn & Teller, who lost a lot of weight, and started with two weeks of this. From Monday until Wednesday, I followed it strictly, but today (Thursday) I ate a slice of turkey on my potato at lunch (still lean meat—and no butter, sour cream, or cheese). I hope it will kickstart some weight loss!

Also, sometime recently, Shakalaka (an indoor trampoline park about an hour away) was replacing the foam in their foam pits and offered the old pieces to anyone who wanted to pick them up, so we went and got a carload of them. The kids have them in the boys’ room and they build with them and spread them out and jump in them and just generally have a great time!

Huntsville also recently got an indoor go-kart place, which Bobby and Timmy have both tried out (and Bobby has already been a second time). We plan to use it as incentive to encourage Nate and John Luke to get their schoolwork done in a timely manner this year. Hopefully it will be effective!

Well, this has gotten pretty long, so I’d better quit. Hope you are doing well!