Since it is already the sixth month, and I’m horribly behind on update letters, I’ll just cover this year so far.

In January, Nate turned 15. He is currently about 6’2” – which is the same as his paternal grandfather. Everyone in our house has to look UP at him!

In February, I turned 44 – love the symmetry of that! Also, we got 10” of snow! The kids were very excited about it, and it lasted a couple days, so they got to really enjoy it! The nice thing about the south is that it didn’t stay on the roads at all, really; by 10am they were easy to drive on, if not completely clear.

In March, Sarah Ruth turned six, making her old enough to sit in a regular car seat, which made her very happy! She still uses the built-in car seat in my car, but isn’t legally required to. It’s hard to believe it’s been six years already! She’s a little princess. 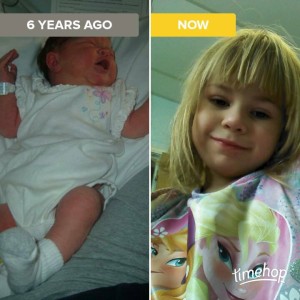 And with that birthday, for the first time in almost 22 years, we have nobody under 6 in the house. It’s different!

Also in March, we discovered Khan Academy – an internet-based learning system that teaches math, primarily, and has courses also in art, science, and history. I decided that it might be fun to learn Geometry (I never took it in high school) and signed up. When I got to where it was confusing me more often than not, I got the idea to start at the very beginning and see how fast I could get through the elementary math. I got through the K-2 in an hour, the 3rd grade in another hour, 4th grade took a couple days, 5th grade took about a week, 6th grade another week or so, 7th grade took about a month, and I’m still working on 8th grade – I didn’t realize how much math I’d forgotten (or never bothered to learn, as my focus in school was more on words). I’m really enjoying learning, though!

In April, Bobby turned 22. He also was awarded a scholarship to the University of Alabama, Huntsville, which he will be using Fall 2016. He finished his second consecutive semester at Northeast Alabama Community College with a 4.0, making his cumulative GPA 3.813 so far. He’s taking summer classes in order to be where he wants to be before transferring to UAH.

In May, Timmy graduated from high school! He’s the third to graduate from our homeschool, and we have three to go. He intends to take some classes at NACC in the fall. We were delighted to have Rachel and my parents in attendance for Timmy’s graduation, and took the opportunity to get a family picture. 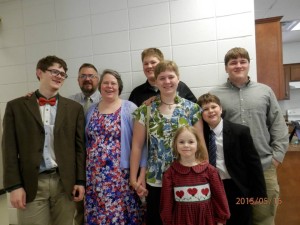 Speaking of classes, Rachel has decided she would like to become a Deaf Interpreter, and is looking into taking classes this fall, as well. 🙂

Also, in May, I won a gift card at a local branch of our bank. I rarely win things, so that was fun! And, Robby’s parents invested in a new-to-them vehicle, and agreed to sell us their ‘old’ one. I put old in quotes because it is newer than any of our other vehicles! We are very thankful they were willing to do that.

On Memorial Day, our church held a cookout, and it was a lot of fun! The kids did big bubbles, the adults (and some of the bigger kids) played horseshoes, and there were a couple balls for the kids to kick around or play catch with, too. There was a lot of good food, and we had a great turnout! It started at 10:00AM, but we were a bit late. On the way there, we passed an RV by the side of the road. We stopped to see if they needed help. Turned out, they had a flat tire. Robby called around and found that nobody was open – it was Memorial Day, after all! So he, Bobby, and Nate stayed to help the guy change his tire while I took the younger kids on to church (Timmy was already there). 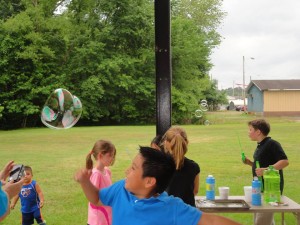 We went to two other graduation celebrations this last month. A lot of my friends’ children are getting into graduating age now! Funny how that happens, isn’t it? One of them was held at the Huntsville Botanical Gardens. We had never been, except at Christmas to drive through and see the lights, so we had no idea how neat a place it really is! I was able to purchase a membership using money I got for some writing I do online, and we fully intend to make good use of it while it lasts!

Also, Nate has a sort of summer job, taking care of the weed-eating of the lawn of a friend at church who is unable to tend to it himself. We take him over there every other week so he can trim the edges and corners. He enjoys the work, and likes getting a little pocket money occasionally. He is using some of it to maintain a prepaid cell phone, which he enjoys using mainly to text Rachel.

We were given a little rectangular pool (the 4-foot by 6-foot, 18” deep kind) that is set up in the driveway, and the kids enjoy playing in it when it’s hot out.

John Luke is the only one I haven’t really mentioned. He has mostly finished 3rd grade (he’s just finishing up the math). He’s a good helper around the house and likes to cook.

Sam – the redbone coonhound – is now about eight years old. He’s a very good dog, and is starting to get white around the muzzle. He gets annoyed at the cat (oh, in case you hadn’t heard, we got a cat late last year) when he tries to play with him. We got the cat (Scout) when he was about five months old, and he is just over a year now. We have really enjoyed having a cat again, even though he isn’t the hunter we’d hoped he’d be. 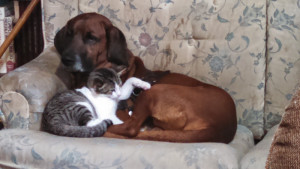 Robby’s sister, who is a graphic designer by trade, created an ad for us this week that we plan to put up in the store windows of some of our customers. Hopefully, this will help to increase our business and allow us to pay off debt and get our bills ahead a little.

All in all, it’s been a very nice year so far. God is good, and we are blessed!

I hope that you are blessed, as well.