It’s been four and a half months since my last update letter (sorry!). A lot has happened in that time!

In March, my oldest daughter became my second graduate. We had a full ceremony followed by a reception for her. She gave a speech, which she also did in American Sign Language for our Deaf friends that attended. We are very proud of her, as she overcame a lot of difficulties to reach this milestone. 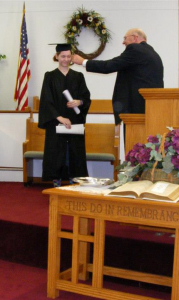 At the end of March, Sarah turned 4! She was very excited about it, too. She loves to tell people she’s four.

April began with Bobby’s birthday – he is now 20! Our first to be out of his teens.

For Mother’s Day, Bobby spent several hours deep-cleaning in the living room and kitchen. That boy knows what his mom likes!

At the end of May, my mom & Dusty came to visit and to pick up Rachel, who was going to stay with her and help in her church’s VBS. My mom & Dusty went out of town on vacation with her brother for two weeks, so Rae was there to feed the pets and watch the house. She decided she likes it there and plans to stay indefinitely. We miss her! 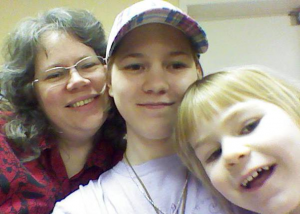 In June, we got the delightful news that Rachel accepted Christ as her Saviour! We were thrilled to hear it! There is no greater joy to a parent’s heart than to know that the children will be spending eternity in Heaven.

The first weekend in June, Bobby & I attended a science-fiction show convention in Huntsville (primarily Doctor Who, if you have heard of it). He dressed as one of the characters. It was a lot of fun! We got to meet one of the actresses for the show. 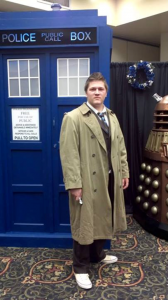 We were able to take a trip to South Carolina over Independence Day weekend, and were able to spend a couple of days there with Rachel. It was very nice! We got to visit with my brother & his family while we were there. We also stopped by our campsite in Dahlonega, briefly, but it rained all week, so we chose not to try to camp.

We switched our cell phones to Verizon from AT&T, but kept the same numbers, so if you have our numbers, don’t worry! They’re the same.

Robby’s sister & her husband are here visiting (here in Scottsboro, not here at my house) as I type this. It is great to get to see them and spend some time with Renee & Joey. He is preaching at our church while they’re here, and they have also done some special music and Renee taught in children’s church.

Speaking of special music, Bobby surprised everyone Sunday night. Timmy arranged to sing a special (“Sweet Beulah Land“), and was joined on stage by Bobby and the violin he has been teaching himself to play for the last few months. 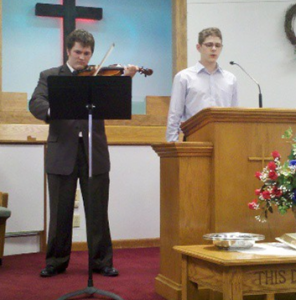 Summer here has been quite mild so far, only getting into the 90s rather than the hundreds being suffered in other areas, and we are thankful for that! I hope that you are doing well. God bless you!