I hope you are well. I am hoping to do better with keeping up with updates this year, so I’m hurrying to do this one before January is over!

December was pretty nice. The Christmas parade on the first Monday of December actually saw some reasonably warm weather, for the first time since we moved here in 1998. Usually, we get freezing weather starting the day of or the day before the parade.

We went to a birthday party for a friend’s son on the 2nd Saturday, and then the following Tuesday, we attended a special memorial service that the funeral home hosted for those who lost a loved one in 2012. While it was a beautiful service, I hope that it will be many years before I “qualify“ to be invited to another one.

We took pictures so I could make a Christmas card (which is enclosed—sorry I didn’t get it to you sooner!!)

I made peanut butter fudge and divinity, which everyone enjoyed. I used the recipes Robby’s grandmother gave me.

We visited with a friend, who wasn’t home when we arrived. The interlude when we were waiting provided us with this adorable photo of Sarah: 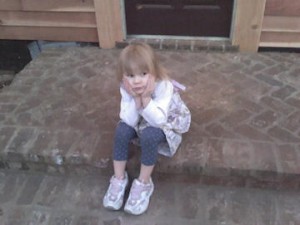 Rachel had a Christmas tree in her room this year—a small 3 or 4 foot tall tree. She and Sarah decorated it together. I believe it was the first time Sarah decorated a tree, since we have had a tiny 2-foot tree on the piano that more or less stays decorated for about as long as she has been alive. 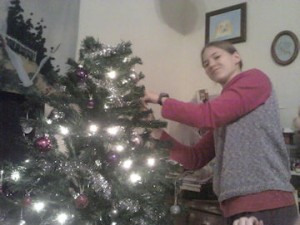 On Christmas Eve, we had dinner at Robby’s parents’ house, as we do every year. After eating, his dad read the Christmas story from Luke. After that, we opened presents, then fellowshipped for a while. 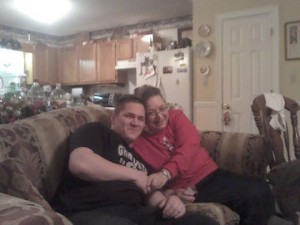 On Christmas morning, we opened family stuff at home. John Luke was quite pleased with his police set and “Perry the Platypus“ pajamas. (It’s a character from a cartoon.)

After Christmas, Robby’s oldest sister, her husband, and two of their children came to visit. It was really great to see them!

And then, the new year arrived! We started out the year with a visit with some good friends. We played games and generally had a pleasant time. We have already planned to visit again, though we haven’t set a date (yet!).

In the second week of January, Timmy finally got his permit (“learner’s license“ here in Alabama). He hasn’t driven much, yet, but is excited about learning how.

Nathaniel turned 13—another teen in the house! He got a guinea pig for his birthday, which he named Frodo.

Bobby is taking a full load this semester, including a drawing class (at which he excels already) and a programming class. Most of his classes are Monday-Wednesday-Friday classes, but one of them is Tuesday-Thursday, and one is online (no on-campus class meetings).

Rachel now has 12 of her paintings for sale at a consignment art shop. It would be very nice if her paintings sell. She will be graduating this spring, but isn’t sure yet what she plans to do after that.

Robby is doing pretty well, in general, and is keeping quite busy these days, which is a good thing! I am also keeping busy with computer work as well as housework and children, but it’s a good busy! My health has improved a lot, but my eyes are still not great, but it may be that I just need a new prescription for glasses. I’ll find out in March.

I hope this letter finds you healthy and happy, and may God bless you!