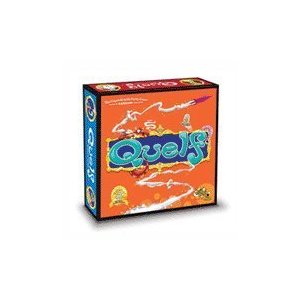 Quelf is an amusing and delightful game in which players act like idiots without it being a problem. Everyone gets in on the fun and it is a blast! There are five categories of cards and eight character pieces (each with its own personality, as shown by quotes on the cards). Apparently some boxes also include biographies of the characters, but the game I bought at Walmart did not include these. The cards include trivia, stuntz, showbiz, a Scattergories-style one, and roolz. This is a game that you really can’t appreciate until you play it for yourself!